Difference between revisions of "Data From Gene Edited Animals" 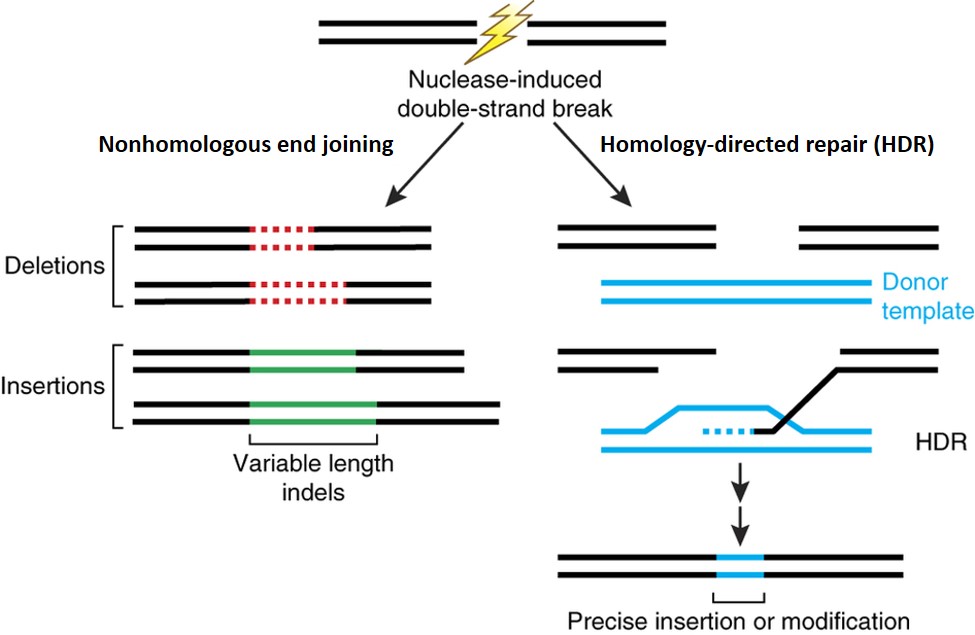 It is worth noting with regard to “off-target” edits or unintended modifications to the genome that a study of whole genome sequence data from 2703 individual cattle in the 1000 Bull Genomes Project revealed more than 86.5 million differences (variants) between different breeds of cattle. These variants included 2.5 million insertions and deletions (indels) of one, or more, base pairs of DNA, and 84 million single nucleotide variants, where one of the four nucleotides making up DNA (A, C, G, T) had been changed to a different one[3]. A small fraction of these mutations have been selected by breeders owing to their beneficial effects on traits of economic importance. None of these naturally-occurring variants are known to produce ill effects on the consumers of milk or beef products. In fact, every meal we have ever consumed is genetically distinct from every other meal in terms of genomic DNA sequences. Genetic variation per se does not pose a unique hazard as it relates to food safety, and it is in fact the fuel that drives animal breeding programs. If an animal that is otherwise healthy and exhibits just the phenotype that is intended by the edit (e.g. changed coat color), then it is hard to envisage a hazard associated with unintended genomic alterations that warrants full genome sequencing. In addition, there is no way to differentiate between naturally occurring genomic alterations and those unintended modifications introduced by editing[4][5]

It should be noted that in March 2022 the FDA announced it planned to exercise enforcement discretion for the marketing of products, including food, from two of Acceligen Inc.’s “PRLR-SLICK” genome-edited beef cattle and their offspring after determining that the intentional genomic alteration (IGA) which in this specific case was prolactin receptor mutations did not raise any safety concerns (i.e. low-risk determination). This was first low-risk determination for enforcement discretion for an IGA in an animal for food use. What this means in practice is that, while developers are generally required to have an approved new animal drug application for IGAs in animals prior to marketing, on a case-by-case basis for those edits that are low risk, the FDA may not expect developers to seek approval of these IGAs.

The data that was provided to the FDA to obtain this low risk determination is detailed in the risk assessment summary and included “genomic data and other information to FDA to demonstrate that the IGA contained in PRLR-SLICK cattle is the equivalent to naturally occurring mutations that occur in conventionally raised cattle with a history of safe use as a source of human food”.

According to this document, “Acceligen provided raw whole genome sequencing (WGS) data and their bioinformatics analysis for four edited calves and their unedited parents. This genotypic data was used to evaluate the actual sequences of the IGA in the animals’ genomes and screen for the presence of any unintended alterations that might pose an animal or food safety concern and risk to the environment. FDA independently analyzed the WGS data and confirmed Acceligen’s conclusion that of the four calves born, three contained the IGA in exon 9 of the PRLR gene and one was determined to be unedited (“no-take”). [One of the edited animals subsequently died of bovine congestive heart failure; BCHF]. Acceligen’s and FDA’s analyses showed that the alleles containing the IGA contain premature stop codons that would result in truncated PRLR protein analogous to the naturally occurring slick mutations. Due to the specific process used to generate the IGA, the cattle containing the IGA were mosaic, meaning that in different cells/tissues of the cattle, different alleles may be present (these cattle could have several, including multiple distinct but equivalent IGA alleles as well as wild-type or otherwise non-IGA alleles). Acceligen included a disclaimer in the product label to describe that PRLR-SLICK cattle may have 2 or more genetically different sets of cells and, as a result, first-generation progeny may not all inherit the slick phenotype.

Based on the data and other information submitted by Acceligen, FDA determined that the IGA contained in PRLR-SLICK cattle and the cattle’s associated products, including offspring, semen, embryos, and food products derived from them, pose low risk to people, animals, the food supply, and the environment. Therefore, FDA does not intend to object to Acceligen marketing the IGA in PRLR-SLICK cattle or marketing the cattle’s associated products. FDA also does not intend to object to Acceligen introducing cattle containing the IGA into the food supply. The agency’s decision is limited to the marketed products (for example, live PRLRSLICK cattle, semen, embryos, and meat) derived from the existing two cattle containing the IGA for which FDA has reviewed data and their progeny. Additionally, FDA intends to treat facilities or farms that are engaged in standard agricultural practices for PRLR- SLICK cattle, including assisted reproduction techniques (such as embryo transfer) or raising them for food production, the same as facilities or farms that are engaged in these practices for cattle without IGAs.” 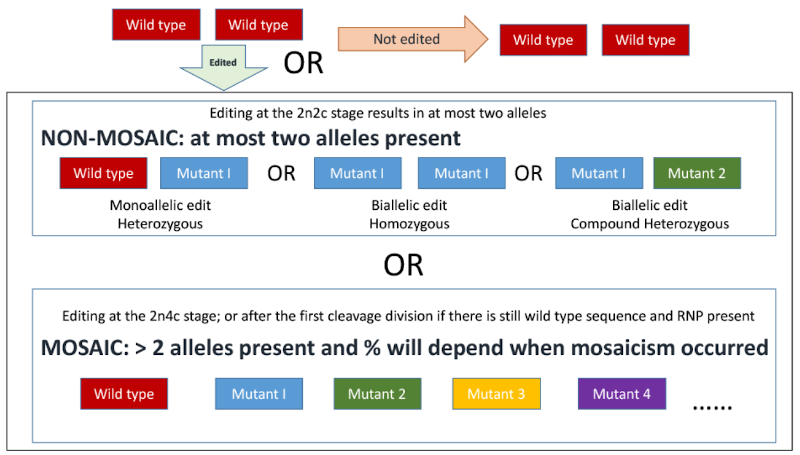 Figure 2. Schematic representation of possible outcomes from CRISPR-mediated mutation by cytoplasmic injection of an in vitro fertilized zygote (one cell embryo). 2n = number of homologous chromosomes, i.e. diploid. 2c/4c = number of copies of chromosomes either before or after DNA replication. Image from Supplementary materials of Hennig et al., 2020[6].