Difference between revisions of "Pelvic Measurements"

The single major cause of dystocia[1] is a disproportion between size of the calf at birth (birth weight) and the cow’s birth canal (pelvic area). Differences in pelvic area are generally due to pelvic height, with discrepancies between the dam and fetus more likely to occur for pelvic height and depth of calf chest than for width measures. Pelvic size, independent of cow weight, affects calving difficulty. Heifers of increased skeletal size usually have larger pelvic openings, but also tend to have heavier calves at birth. Hence, selection for cow size alone is ineffective. Heifer weight and age generally have a positive relationship to pelvic area, but weight is not always a good indicator. External dimensions such as width of hooks and length of rump are not good indicators of pelvic area or calving difficulty. For these reasons pelvic measurements can be a useful management tool to eliminate heifers with a higher potential for calving difficulty. Structural traits in cattle tend to be highly heritable and pelvic area is no exception. This means there is a large genetic influence on pelvic area, which results in rapid response to selection. However, pelvic area is genetically correlated with many other traits, so selection for increased pelvic area alone can result in other traits changing for the worse.

Pelvic area is an effective indicator of maternal calving ease. Selection of sires with high calving ease direct (CED) expected progeny differences (EPDs) mated to heifers that are screened for pelvic area will decrease the incidence and (or) severity of calving problems and minimize calf losses from dystocia.[2] Pelvic measurements should be used in addition to, rather than in place of, selection for size, weight, and above all fertility.[3] Producers should be aware that selection for pelvic area will likely not result in increased pelvic dimensions alone, but may result in increased size of the entire skeleton and animal.[4] These correlated responses can be modulated in a multiple trait selection program with emphases on moderate mature size and increased direct calving ease. Pelvic measurements can also be successfully used to identify abnormally small or mis-shaped pelvises. These situations, left unidentified, are often associated with extreme dystocia, resulting in Cesarean delivery and even death of the calf or dam.[5][6]

While pelvic area can be used as an effective indicator trait for maternal calving ease, it may be most helpful for predicting earlier maturing heifers. Bullock and Patterson (1995) [2] reported that puberty exerts a positive influence on pelvic width and area in yearling heifers; however, the differences observed among heifers as yearlings were not preserved when calving as two-year-olds. Therefore selection (culling) decisions based on pelvic measurements and contemporary grouping for genetic analysis of pelvic measurements should include consideration of pubertal status at the time of the examination. The data suggest that puberty plays a role in pelvic size as yearlings, but once heifers reach puberty the effects may no longer be present. The effect of pubertal status complicates the use of phenotypic selection on pelvic area for maternal calving ease, but highlights the fact that pelvic area can be a useful indicator of late or early puberty and would be best utilized in national cattle evaluation where contemporary groups are properly formed.[7]

Pelvimetry is a useful culling tool to aid in the management of dystocia.[8] Pelvic measurements (Figure 1) can be obtained with a Rice Pelvimeter (Lane Manufacturing, Denver, CO), the Krautman-Litton Bovine Pelvic Meter (Jorgensen Laboratories, Inc. Loveland, CO), or the Equibov Bovine Pelvimeter (Ontario, Canada). The Rice pelvimeter is the preferred instrument to obtain pelvic measurements in cattle due to its ease of use, good repeatability, ability to read to at least 20 cm, and low cost compared to other pelvimeters. Pelvic area measured by the Rice pelvimeter is accurate and repeatable between and within veterinarians.[9] 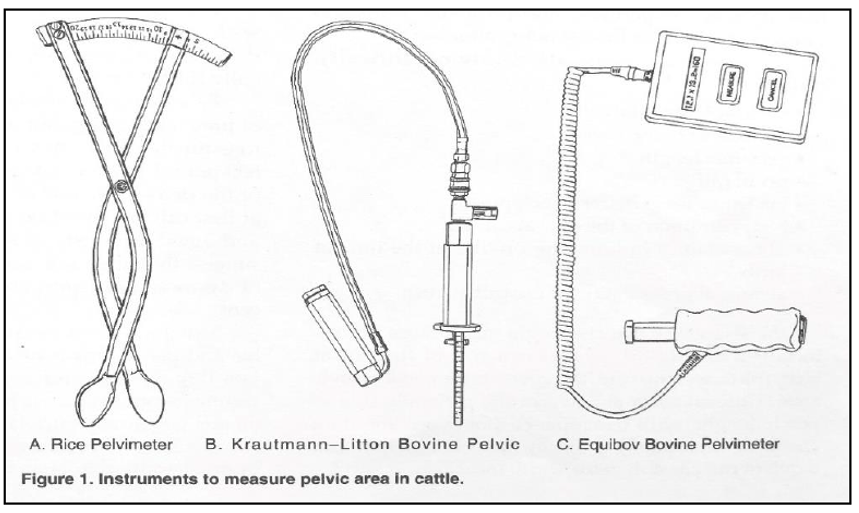 It is important that the person doing the measuring have a thorough understanding of the birth canal, pelvic structure, and reproductive tract. Practice and experience are necessary before accurate measurements can be obtained. The vertical measurement is the vertical diameter between the symphysis pubis on the floor of the pelvis and the sacral vertebrae. The horizontal measurement is obtained by determining the horizontal diameter at its widest point between the left and right ileal shafts (see Figure 2). These measurements are read in centimeters and multiplied together to obtain the total pelvic area in square centimeters. Generally, as seen from Figure 2, the vertical dimension is greater than the width of the horizontal dimension.[10]

Heifers should undergo pre-breeding evaluations that include reproductive tract scores and pelvic exams[11] four to six weeks prior to breeding. At the time these examinations are performed, a pelvic area of 150 cm2 or greater is considered to be a passing measurement and re-measurement is not necessary after the initial exam. Heifers with a pelvic area less than 150 cm2, however should be re-measured at the initial pregnancy exam within 90 days from the start of the breeding season. Upon re-measurement, heifers should have a minimum pelvic area of 180 cm2 or greater. The average pelvis grows at a rate of 0.27 cm2 per day from yearling to two years of age and this fixed linear correction factor can be used to adjust pelvic area based on the age at which measurements are obtained. Using pelvic measurements to screen heifers with abnormally small or structured pelvises and selection of service sires based on CED-EPD effectively minimize the incidence and severity of dystocia when managed together.