Heifers that calve early during their first calving season have higher lifetime production than those that calve late (Lesmeister et al., 1973; Perry and Cushman, 2013). Because most beef calves are weaned at a fixed time rather than on a weight-constant or age-constant basis, calves born late in the normal calving season are usually lighter than those born early. This tends to decrease the total lifetime productivity of their dams (Lesmeister et al., 1973). Furthermore, cows that calve late one year tend to calve late or fail to calve the subsequent year (Burris and Priode, 1958). Therefore, the age at which a heifer reaches puberty is highly correlated with the date at which conception occurs, and conception date during a heifer’s first breeding period is correlated with lifetime fertility and reproductive longevity.

The reproductive tract scoring system (RTS, Table 1; Anderson et al., 1991) was developed to assist beef producers in the selection of herd replacements and to support the timing of estrous synchronization programs (Patterson et al., 2013a). The reproductive tract scoring system is used to estimate pubertal status. Scores are subjective estimates of sexual maturity, based on ovarian follicular development and palpable size of the uterus. An RTS of 1 is assigned to heifers with infantile tracts, as indicated by small, toneless uterine horns and small ovaries devoid of significant structures. Heifers scored with a RTS of 1 are likely the furthest from reaching puberty at the time of examination. Heifers assigned a RTS of 2 are thought to be closer to puberty than those scoring 1, primarily due to larger uterine horns and ovaries. Those heifers assigned an RTS of 3 are thought to be on the verge of estrous cyclicity based on uterine tone and the presence of palpable follicles. Heifers assigned a score of 4 are considered to be estrous cycling as indicated by uterine tone and size, coiling of the uterine horns, as well as the presence of a preovulatory size follicle. Heifers assigned a score of 4 do not have an easily distinguished corpus luteum. Heifers with an RTS of 5 are similar to those scoring 4, except for the presence of a palpable corpus luteum. Prebreeding examinations that include RTS furnish the opportunity to assess reproductive development, but further provide an appraisal of possible aberrant situations that may detract from a heifer’s subsequent reproductive potential (Patterson et al., 1999; Lamb, 2013; Patterson et al., 2013b).

Figure 1 represents a modified interpretation of the conceptual model for puberty onset in the heifer presented by Day and Anderson (1998). This model combines the associated endocrine and ovarian changes that occur as heifers approach puberty, in addition to the corresponding RTS that would be assigned at respective points in development. An RTS of 1 corresponds to the point at which the pattern of luteinizing hormone (LH) release is characterized by low-frequency, high amplitude pulses. This is due to the fact that the hypothalamic-pituitary axis is highly responsive to negative feedback from estradiol. Reproductive tract scores of 2 and 3 are associated with the pre- and peri-pubertal phase, at which time responsiveness to estradiol negative feedback begins to decrease, causing increases in LH pulse frequency, follicular growth, and estradiol secretion. The decline in estradiol negative feedback and increase in LH secretion result in significant increases in follicular growth, and elevated concentrations of estradiol sufficient to induce estrus and the preovulatory LH surge. Reproductive tract scores of 4 and 5 are assigned to heifers that have reached puberty, but differ in stage of the estrous cycle at the time of the prebreeding examination (follicular phase, RTS = 4; luteal phase, RTS = 5). 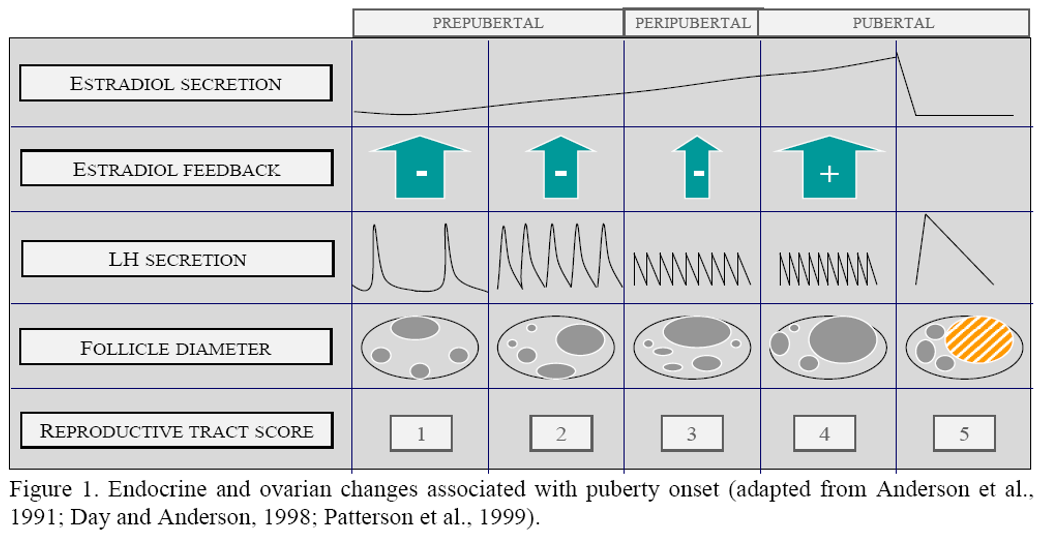 Reproductive tract scoring is a repeatable (between and within veterinarians) and accurate (sensitivity = 82% and specificity = 69%) measure of pubertal status in heifers (Rosenkrans and Hardin, 2003). Research has shown that RTS is a predictor of heifer fertility, compares well with other traits used as predictors of production outcomes, and is likely to be a good predictor of lifetime production of the cow (Pence and BreDahl, 1998; Pence et al., 2007; Holm et al., 2009). Recently, RTS has been found to correlate with artificial insemination pregnancy rate following fixed-time insemination (Patterson and Thomas, 2019). Prebreeding evaluations that include assignment of reproductive tract scores and pelvic measurements should be performed four to six weeks prior to the scheduled start of the breeding season. This timing provides a check on the development status of heifers, and allows time to provide adjustments to nutritional programs when needed. Beef heifers in many cases are placed on estrous synchronization protocols to facilitate use of artificial insemination during the first breeding season.

A standard measure of success of the postweaning to prebreeding period is when a minimum of 50% of the heifers in a given group are estrous cycling based on RTS. This benchmark indicates that heifers are adequately developed and ready to be placed on an estrous synchronization protocol and that acceptable pregnancy rates can be expected. At the time RTS are assigned, pelvic measurements should also be obtained and results of these two measures of development should be considered in total (Patterson and Bullock, 1995). This practice allows for better determination of the appropriate estrous synchronization protocol to use and at the same time provides critical information in situations where troubleshooting may be required.

Pregnancy diagnoses should be performed within 90 days from the start of the breeding period, which then provides the opportunity to assess relationships between RTS and not only if heifers became pregnant, but more importantly, when they got pregnant (Patterson et al.,2018; Patterson and Thomas, 2019). These conclusions are supported by studies reported by Hall (2005) and Gutierrez et al. (2014) which involved the comparison of heifers that were in a fixed-time artificial insemination protocol followed by a natural service clean-up period versus natural service only. Gutierrez et al. (2014) reported that RTS were related to both the percentage of beef heifers that became pregnant during the breeding season and the time at which heifers became pregnant.

All heifers enrolled in the Missouri Show-Me-SelectTM Replacement Heifer Program are required to undergo prebreeding examinations that include RTS and pelvic exams (Patterson et al., 2018). These assessments have improved the performance of heifers entering the herd and provide the opportunity to compare RTS with other important reproductive endpoints. The reproductive tract scoring system has yet to be utilized for the estimation of genetic merit in national cattle evaluations.

Patterson, D. J., and J. M. Thomas. 2019. Control of estrus and ovulation in beef heifers and cows. Theriogenology. In press.